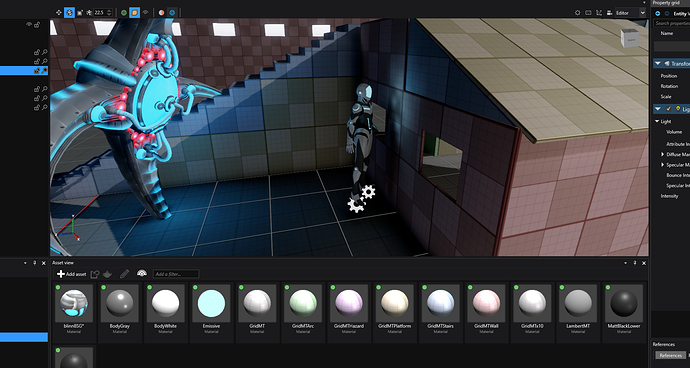 Voxel GI allows approximate indirect illumination, computed in real time on the GPU. It works directly within the Xenko Studio viewport, and in (desktop) game targets. It is based on NVidia VXGI research. And while it’s not nearly as sophisticated as NVidia VXGI 2.0 available in the Unreal Engine VXGI branch, the results are pretty interesting.

Does it work on mobile? Don’t expect this to work on mobile anytime soon. It requires newer, more advanced mobile APIs; the voxel buffer is pretty big to fit into a mobile memory budget; and making it fast in the tiled rasterizers of mobile devices will take work.

How does this related to RTX/DXR hybrid raytracing? VXGI works and is real-time interactive on most of the discrete GPUs out there today. I sponsored VXGI development because I have an app that requires real-time GI, and VXGI is my “compatible with all hardware” solution. I plan to support work to add DXR hybrid raytracing to Stride3d in the future for bleeding edge hardware owners.

DISCLAIMER: There is an important bug building VoxelGI game targets in the current v4.0.0.1-beta2-0928 release. It has been fixed in head of tree.

CREDITS: The code was written by Sean Boettger, and the project was started and funded by David Jeske.

NEXT STEPS: The next steps are going to be cleaning up some usability bugs in the Stride3D Studio editor. Stride Studio may crash (or produce unclear viewport errors) if the VoxelGI setup is done incorrectly. We’d like to make it easier and more intuitive to setup. There will be a Voxel GI sample project. After that, it’ll depend on what users want from it. The short list is improving some quality issues, like light-bleed through occluders, making ray-sampling configuration more intuitive, and debug visualizations easier to setup and useful.

If you wish to file bugs against VoxelGI specifically, feel free to post in this thread, or put them into the Stride issue tracker and include VoxelGI in the title.

I’ll gonna take a look, thanks!